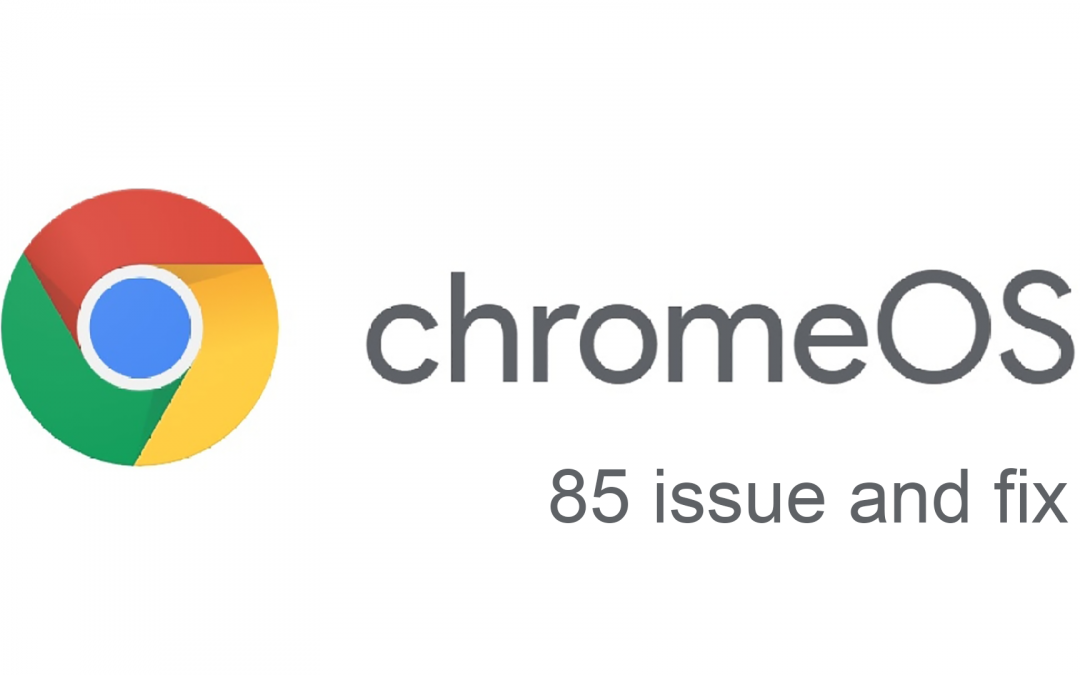 Updated 9/14/20: We have identified the issue and have released a patch to the Arreya client application that works around the issue caused by the Chrome OS upgrade from 84 to 85. Client devices should automatically pick up the update and begin displaying content again.

You may need to reboot your devices if they are stuck in the reboot loop, or stuck at a white or black screen. This can be done remotely through the Google Admin console or by physically powering off the device and turning it back on. If you are still having issues, please contact support@arreya.com for help.

END_OF_DOCUMENT_TOKEN_TO_BE_REPLACED 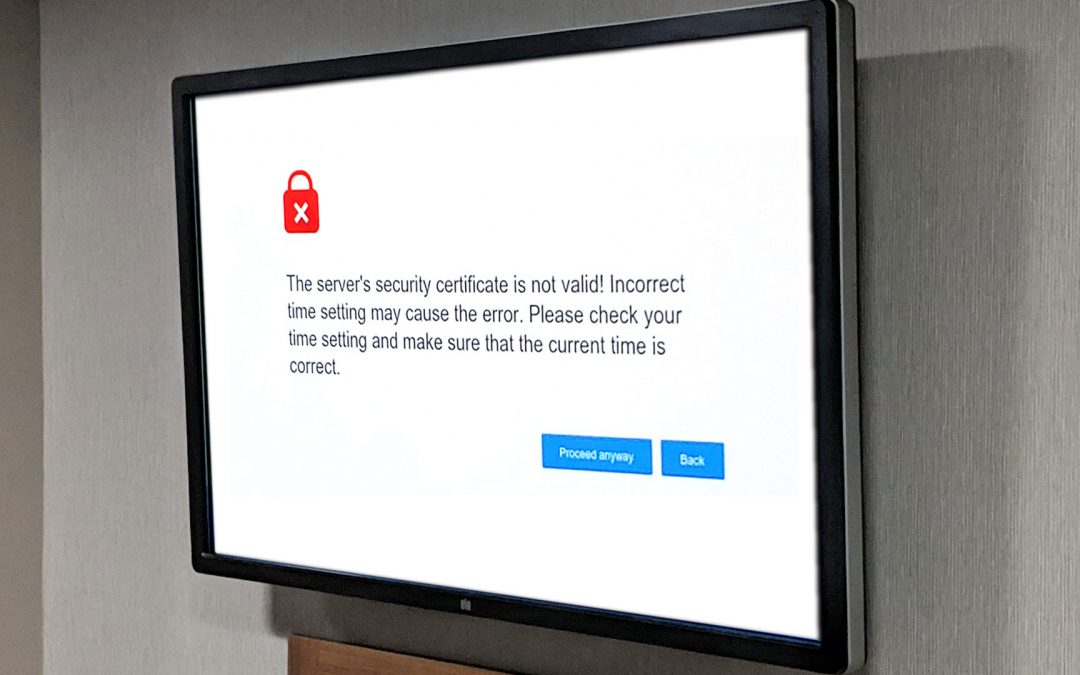 Updated (7/10/20) AddTrust Root CA Expiration Fix:
Arreya’s development team released an update in early July that resolves the certificate error on some older platforms that were missing the newer root CAs. If your screens are still displaying a certificate error, please reach out to our support team at support@arreya.com and we’ll be glad to help get your issues sorted.

One of the largest SSL certificate providers and certificate authorities, Sectigo, controls multiple SSL root certificate authorities (CA) that issue intermediate and end entity certificates, that make the web safe, and functional the way we know it today. On May 30th, 2020 the AddTrust Root CA controlled by Sectigo expired causing some media players, SOCs and computers to fail when loading a number of websites, including their Arreya channels. There were two main issues that compounded and caused security issues on the majority of affected platforms. Both issues are due to the fact that they haven’t received software updates for an extended period of time.

The first issue that caused the certificate error was the lack of security updates that typically should include new root CAs. Devices that have updated root CAs after mid 2015 should not exhibit the issue since the new CAs are valid until 2038. Certificates issued through Sectigo are cross signed between the legacy and modern root CAs, so the transition between the old CA and new CA should be seamless. One solution to this issue is to remove old and manually add the new root CAs on the device, which can vary greatly in difficulty depending on the platform.

The second issue that caused the error was a bug in the open source software library OpenSSL that is used to securely transmit information over the internet. OpenSSL is a library that implements the TLS/SSL protocol, and uses SSL certificates to verify the end entity is who it says it is. A bug in older versions of OpenSSL, before around version 1.1.1, had issues verifying the certificate chain with the AddTrust certificate and newer UserTrust and Comodo RSA CAs. This issue is not as easy to resolve correctly, as it requires updating OpenSSL which typically is compiled in the operating system or device firmware.

Many manufacturers are leaning on software providers to fix the issue on the server issue. Server admins can typically fix the issue by deleting the expired AddTrust certificate, and the client won’t run into the OpenSSL bug preventing the alternate UserTrust/Comodo certificate from being verified.

Although this issue can be resolved server side fairly quickly, it exposes a bigger underlying issue. Some of the affected platforms lack regular security updates that would have prevented the issue from occuring in the first place. Certificates expire and rotate constantly, and this is just one instance of the issue occurring. If software libraries aren’t being regularly updated, it’s expected that the same issue will happen again in the future, with other root and intermediate Certificate Authorities.

One of the key aspects to successful digital signage is modern hardware that receives frequent security updates, a major reason we recommend using Chrome devices.  Fortunately this issue did not affect the majority of Arreya clients, however if you are experiencing a security error displaying on your screen, please reach out to our support team https://arreya.com/support/ 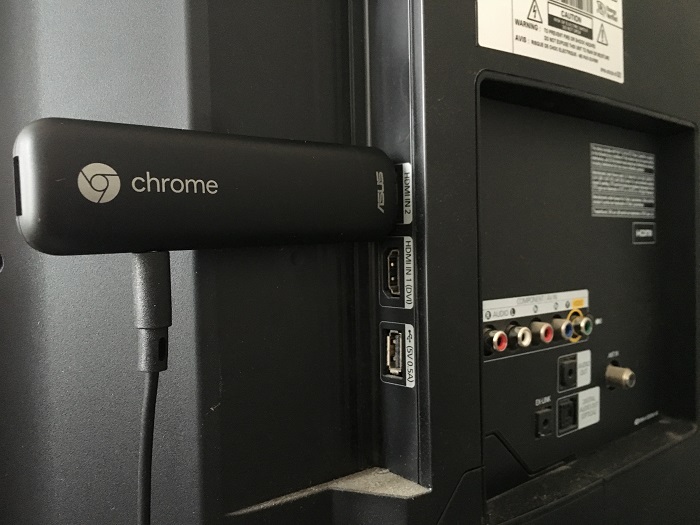 Arreya’s technical team began testing on a freezing issue reported by users in April 2018. We pinpointed the issue to some Google Chrome OS devices that would crash or freeze until rebooted. We immediately reported it to Google and began supplying Google with testing reports so their technical teams could recreate the issue. For our users affected by the issue, we found a work around that would keep some of them going for a while by triggering the affected devices to automatically reboot once a day.  It was not triggered by a certain type or amount of digital signage content but would occur randomly, usually taking less than 24 hours to occur. The issue seemed to only affect the ASUS Chromebit and the AOpen Chromebox Mini and was not caused or triggered by Arreya.

The issue was extremely difficult to reproduce, but Google engineers identified the issue and released a fix in November 2018. As of late November, the issue is fixed and verified in the latest Developer release and should be rolled to Beta and Stable around the second week of December 2018.

How To Update Your Chrome Device

Users with automatic updates turned on will not need to do anything, and will receive the update as soon as it is available to the platforms. If Beta channel has the release before the stable promotion date, users can change the release channel to Beta via their admin console and force the devices to receive the update. Switching the devices to the Development channel is not recommended for production use, but users can test the fix in the Development channel of Chrome.

How can I see if my Chrome Device has the update?

In the Hardware and OS section of the device information, you will find information about the software versions of the Chrome device. The Platform Version must be above 11151.31.0 to have the update. 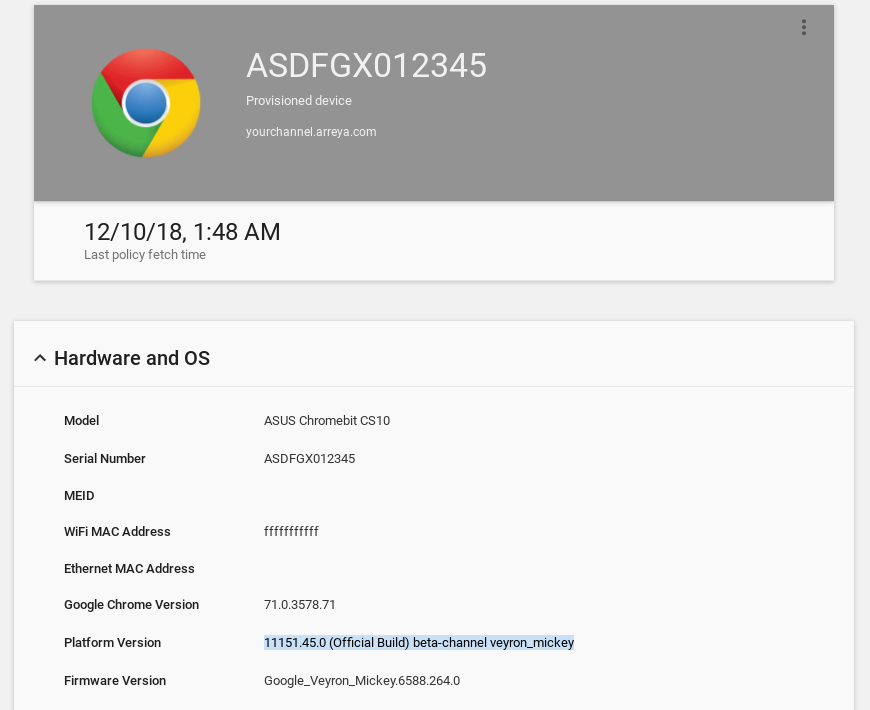 The common denominator between the ASUS Chromebit and AOpen Chromebox Mini is the processor they use, the Rockchip RK3288 with the ARM® Mali™-T764 GPU. In early 2018 Chrome developers started merging in driver updates from ARM for their Mali graphics processor. In April, Chrome developers noticed an issue with a different platform; a new power saving feature was enabled by default which didn’t play well with the rest of the processor and Chrome OS, this feature was disabled for this platform. Unfortunately this platform used a newer Linux kernel version (4.4) so the fix wasn’t applied to the platforms we used (3.14). Investigating and testing the issue was difficult due to a couple of factors. The crash seemed to occur randomly and wasn’t triggered by any one thing due to the nature of the issue. The issue was caused by a feature automatically enabled in the new driver that delegated power management between the driver and the platform. This didn’t play well with the rest of the hardware/software combination and would cause instability during voltage/frequency transitions. Any normal use of the GPU will cause a voltage/frequency transition, and could cause the crash to happen.

We haven’t blogged about updates for a while, but we have sure been busy!

March and April brought us some great new features – RSS Feeds and Text Tickers (Marquee), along with playlist support for YouTube. We also pushed out a number of fixes and small enhancements to the user interface.

In addition to the list below, make sure to check back soon for some big announcements.  We’ve been working hard on the top features our users have been asking for and we’re just about ready to begin rolling them out.

Along with a number of fixes and small changes, here’s what we have been up to over the last few weeks – 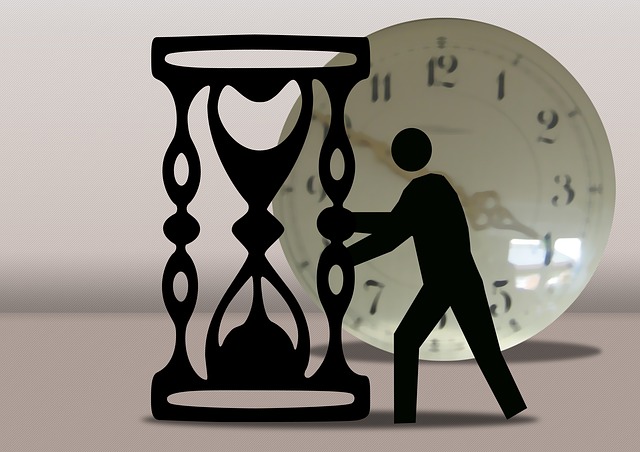 This release adds two new widgets, Countdown & Hebrew Date to our base package, along with several improvements.

First up, we have the Countdown widget.  This widget allows you to count up or down from a point in time, and display an optional message when the countdown is complete.  Some examples are “X days until Christmas”, “There are only X days until summer break!”, and for counting up – “We have been accident free for X days”.  We include options for displaying the number of days/weeks/months shown, as well as the text before and after the countdown value, and the completed message for count down timers.

Next we have a Hebrew date widget!  Requested by one of our clients, this widget will display the Hebrew date in your presentation. We have options for displaying it in Hebrew, or as the English transliteration. 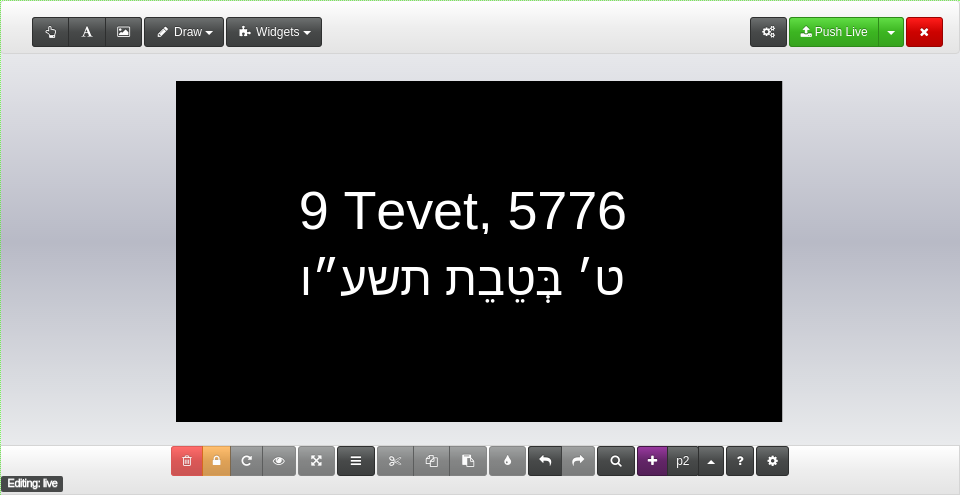 All changes in this release – 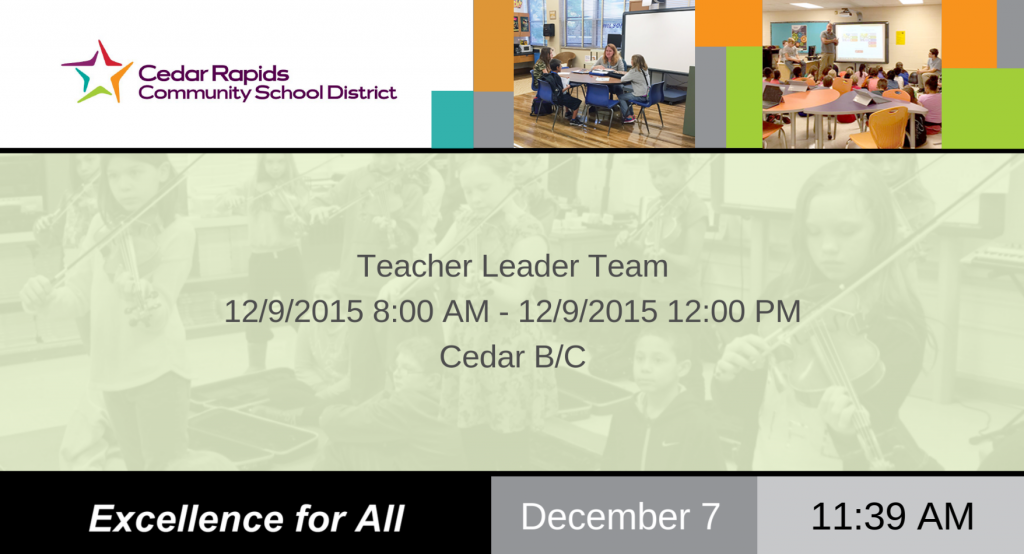 This release adds a new Slideshow view to the Calendar widget.  With the new view, your event information is pulled from Google Calendar and displayed as a slideshow.  The slideshow can be re-sized and styled to fit your design as an additional widget, or as a slideshow on the opening page.  You choose the transition, background color, timing, and duration (daily/weekly events).  The calendar can even be tied in with your conference/meeting room scheduling and used to display upcoming meetings for the organization.

« Older Entries
This site uses cookies. By continuing to browse the site, you are agreeing to our use of cookies.OkLearn More